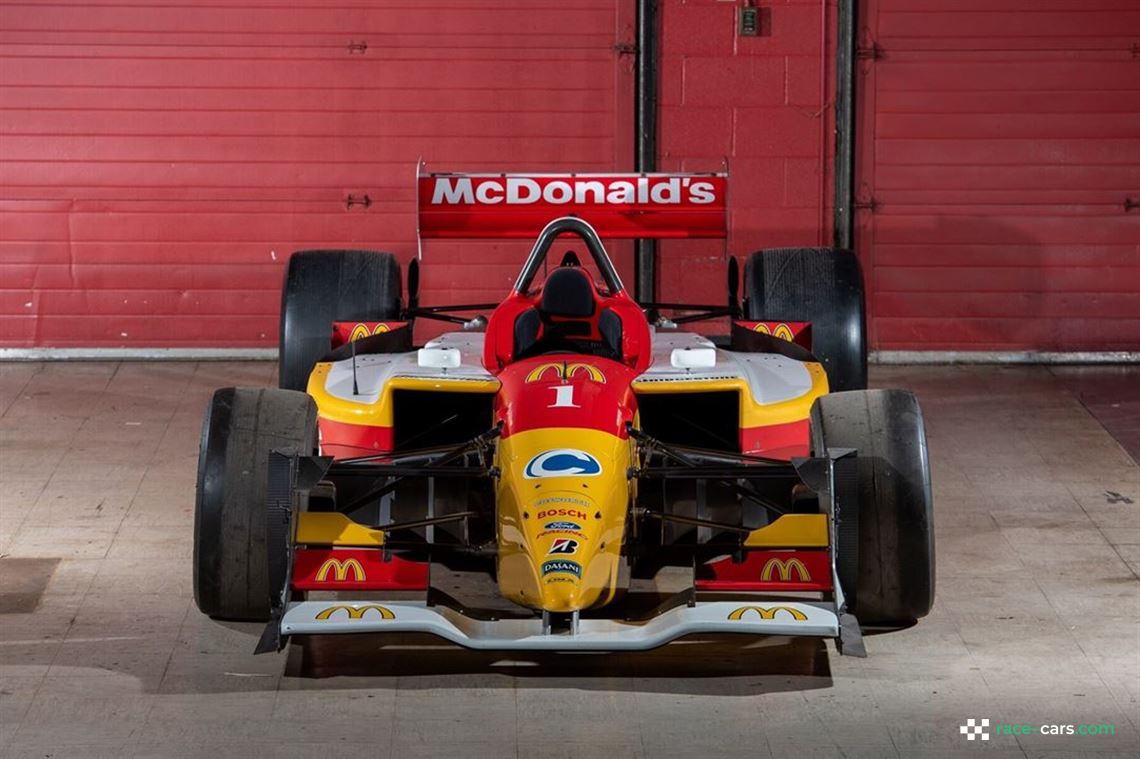 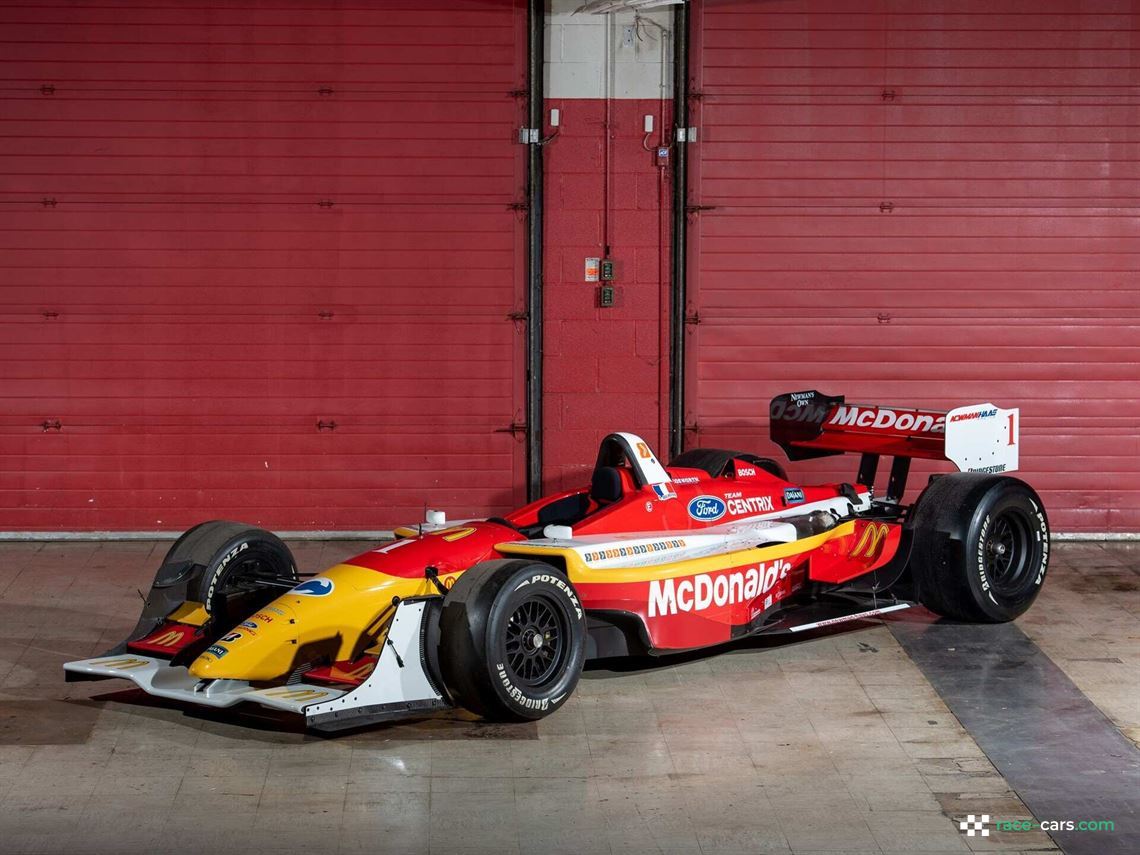 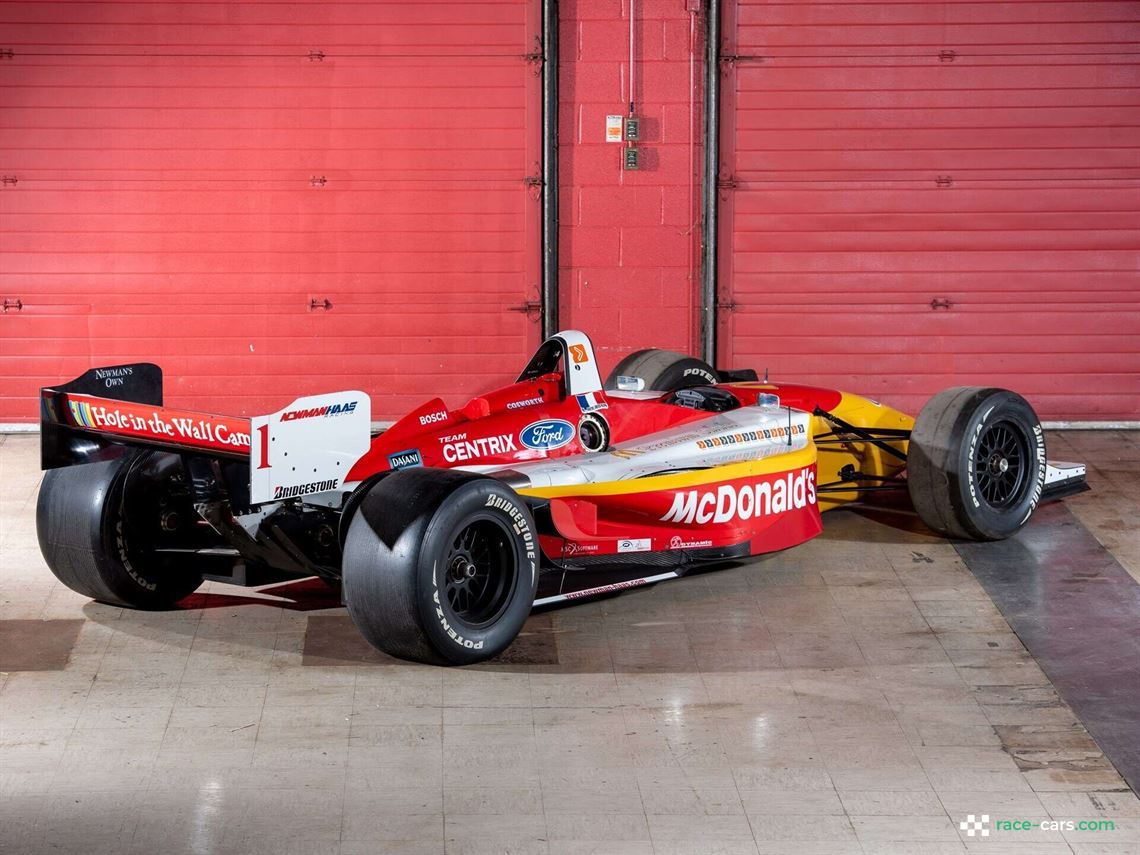 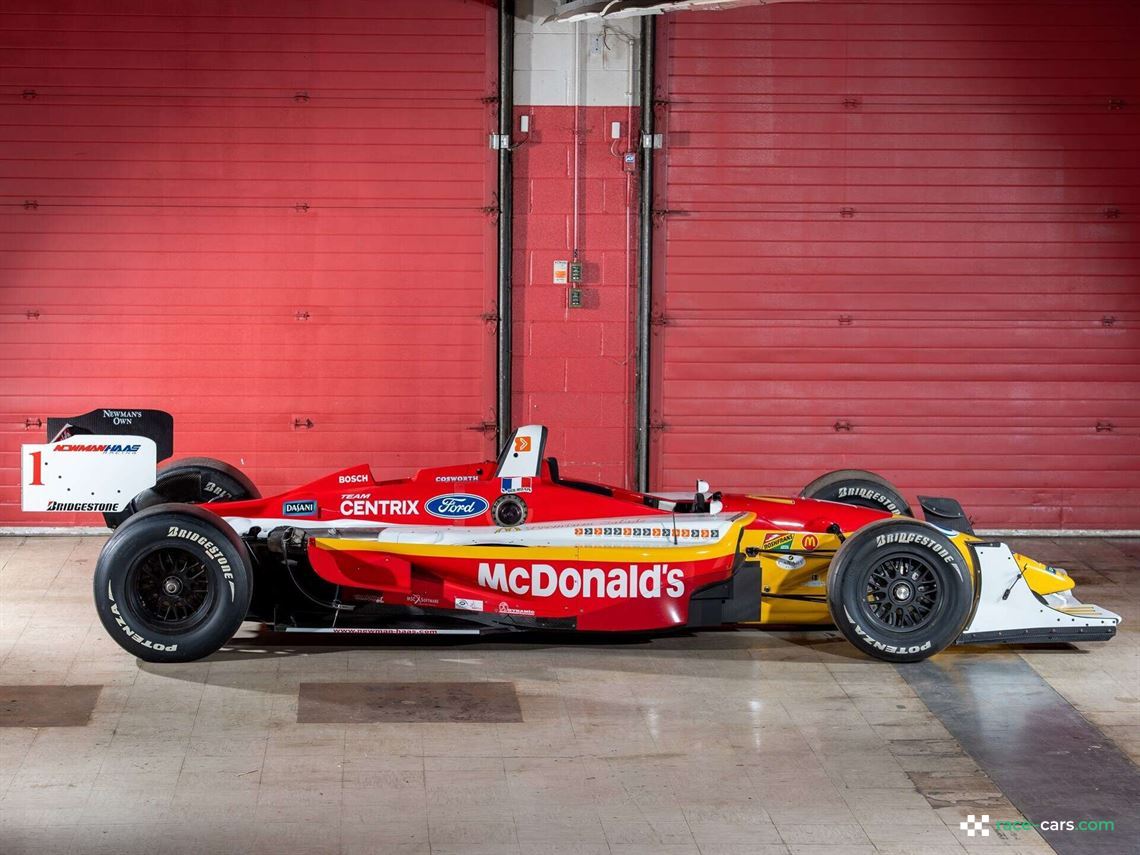 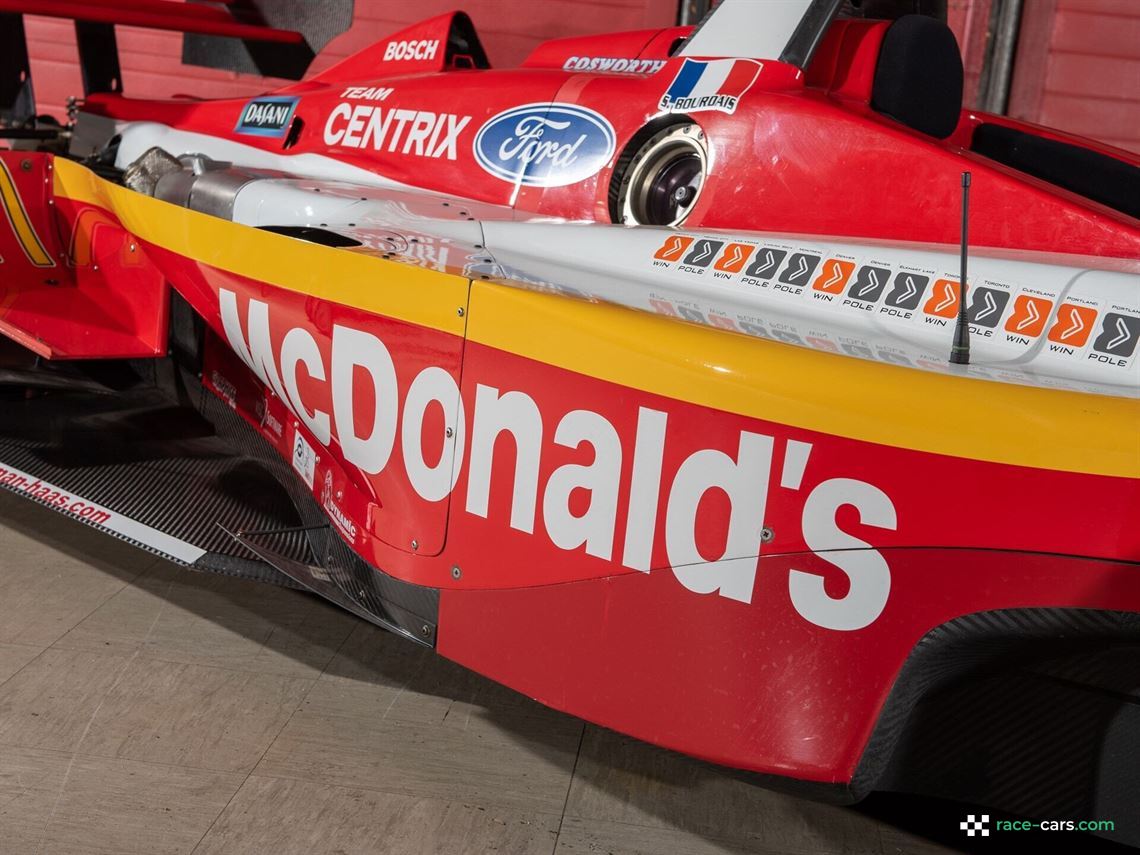 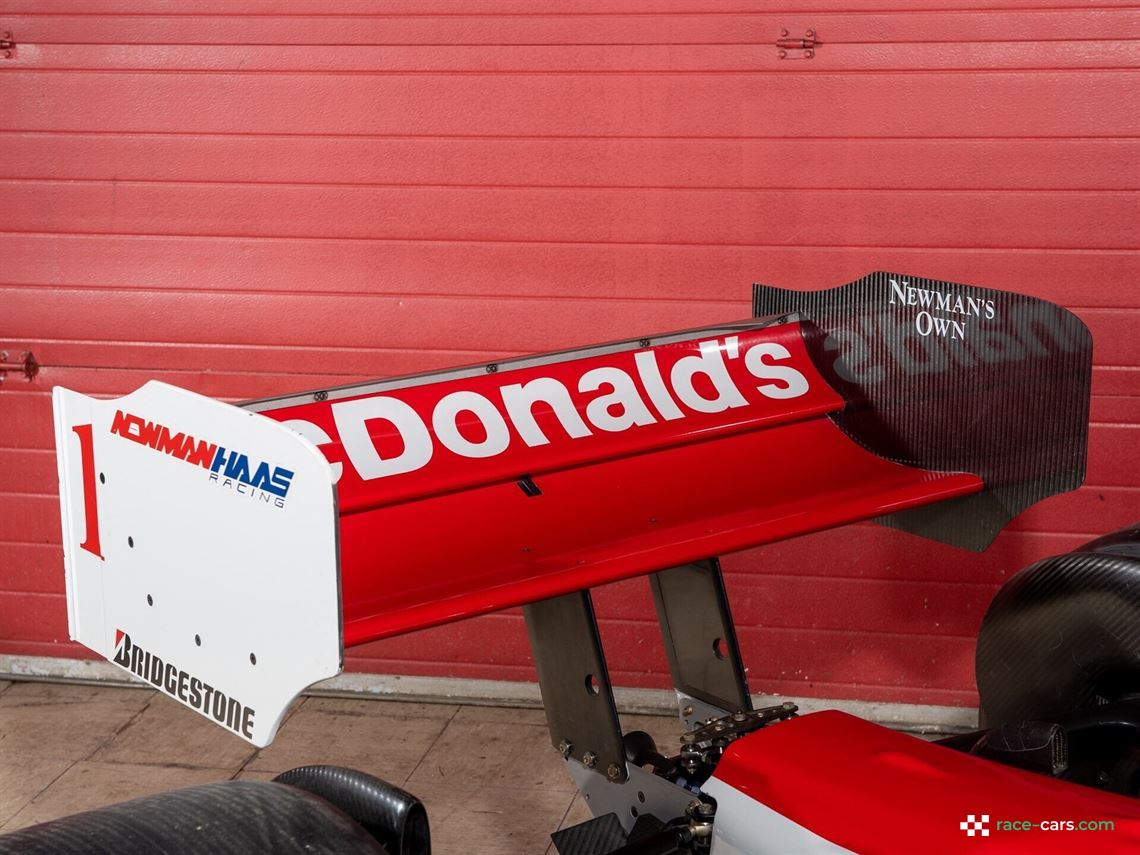 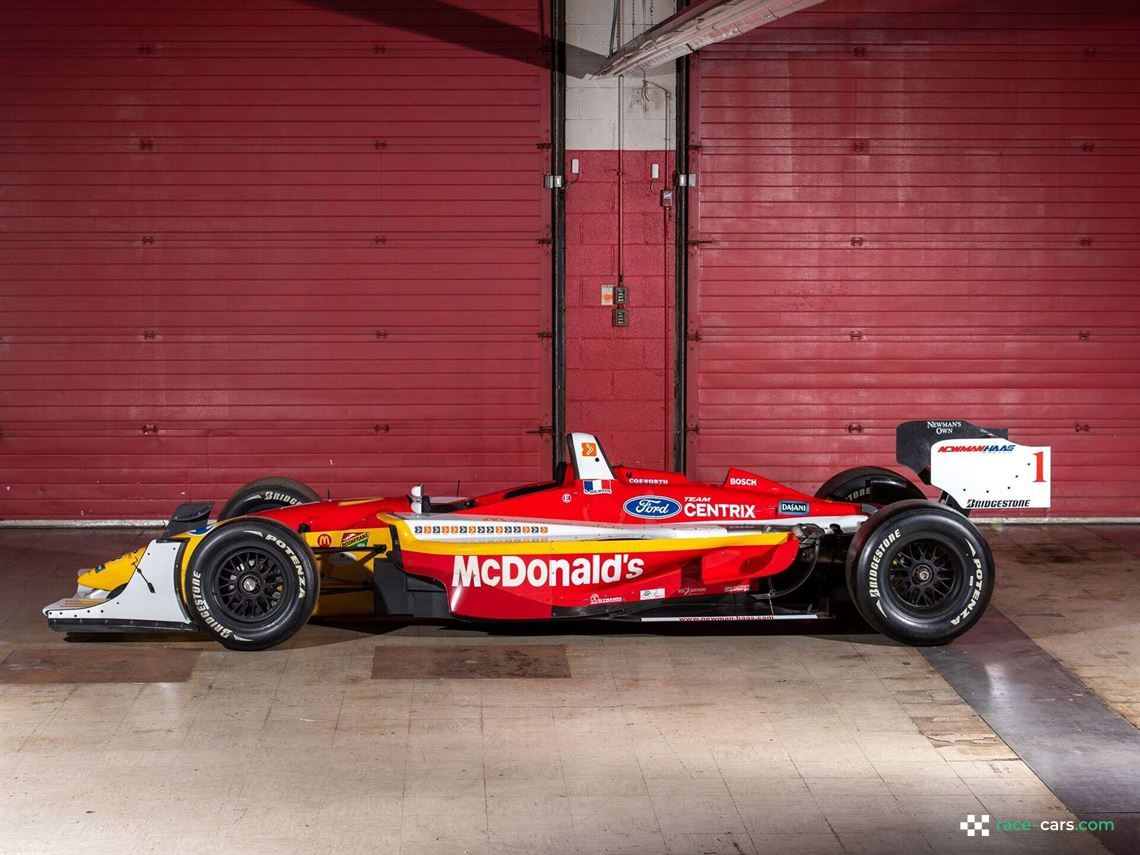 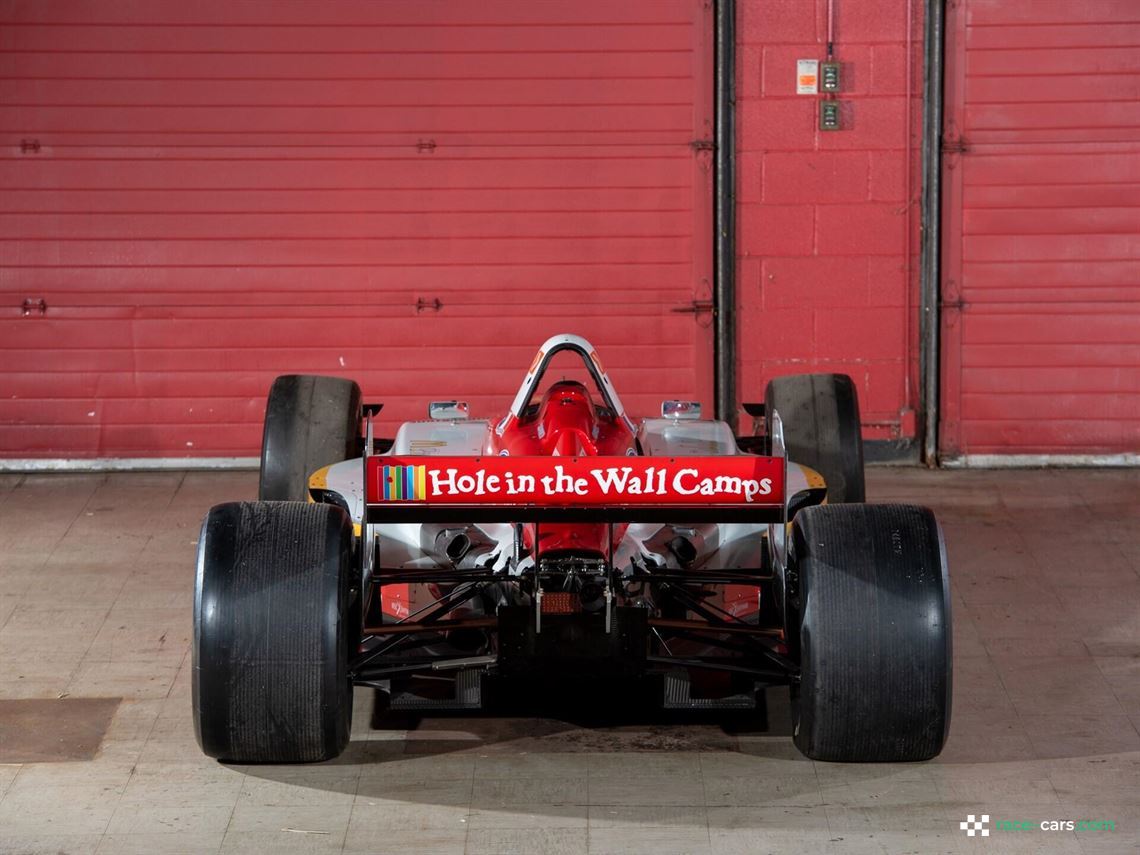 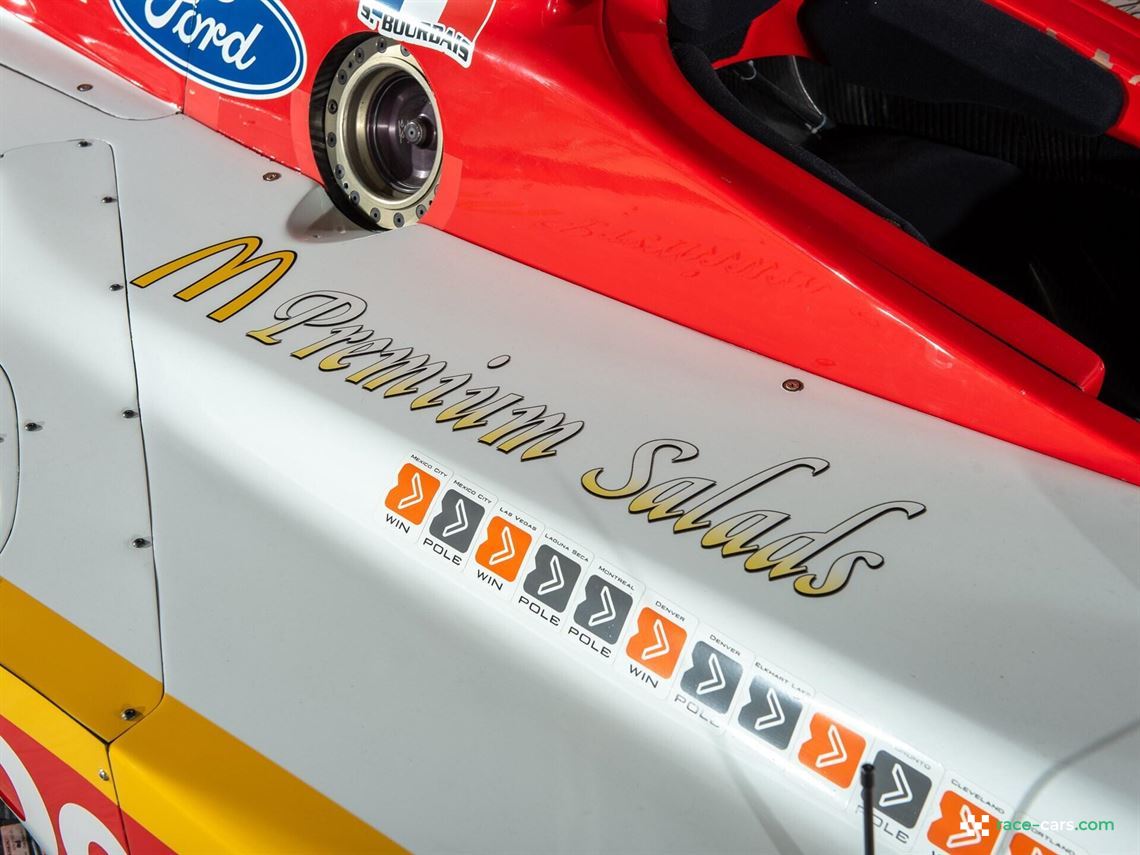 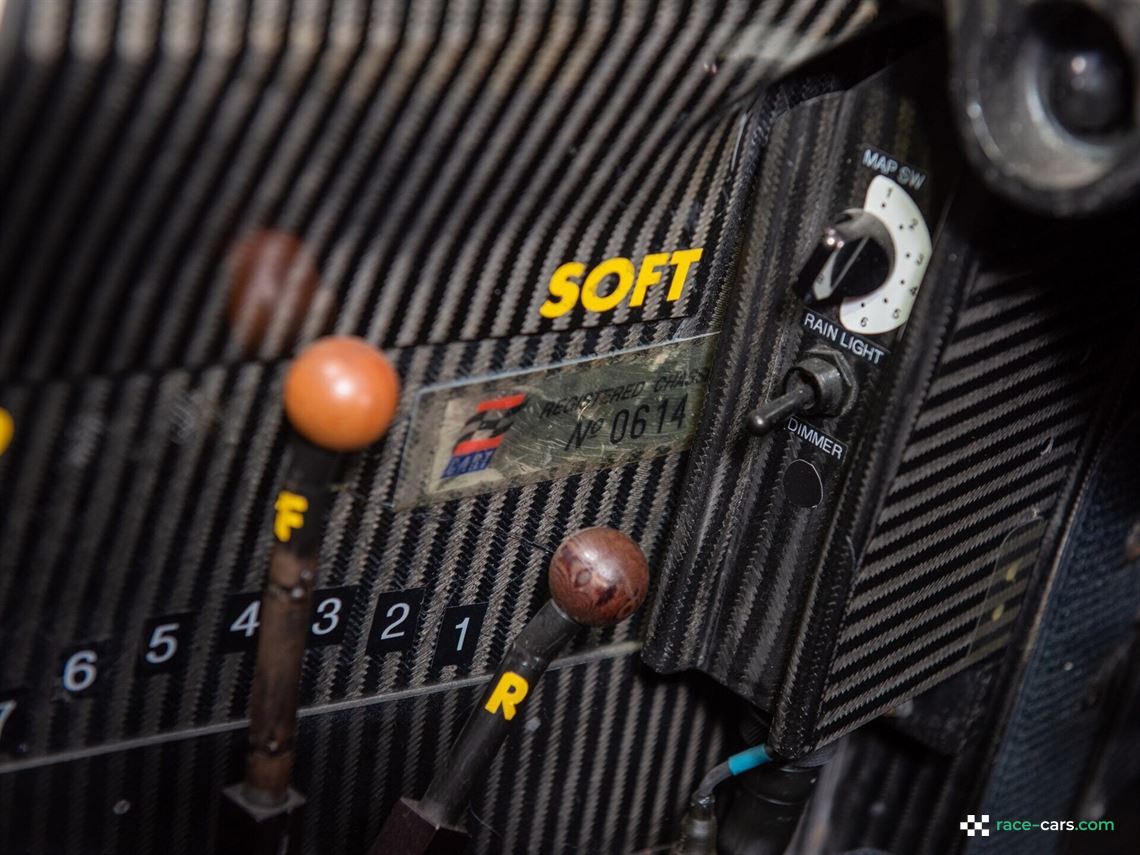 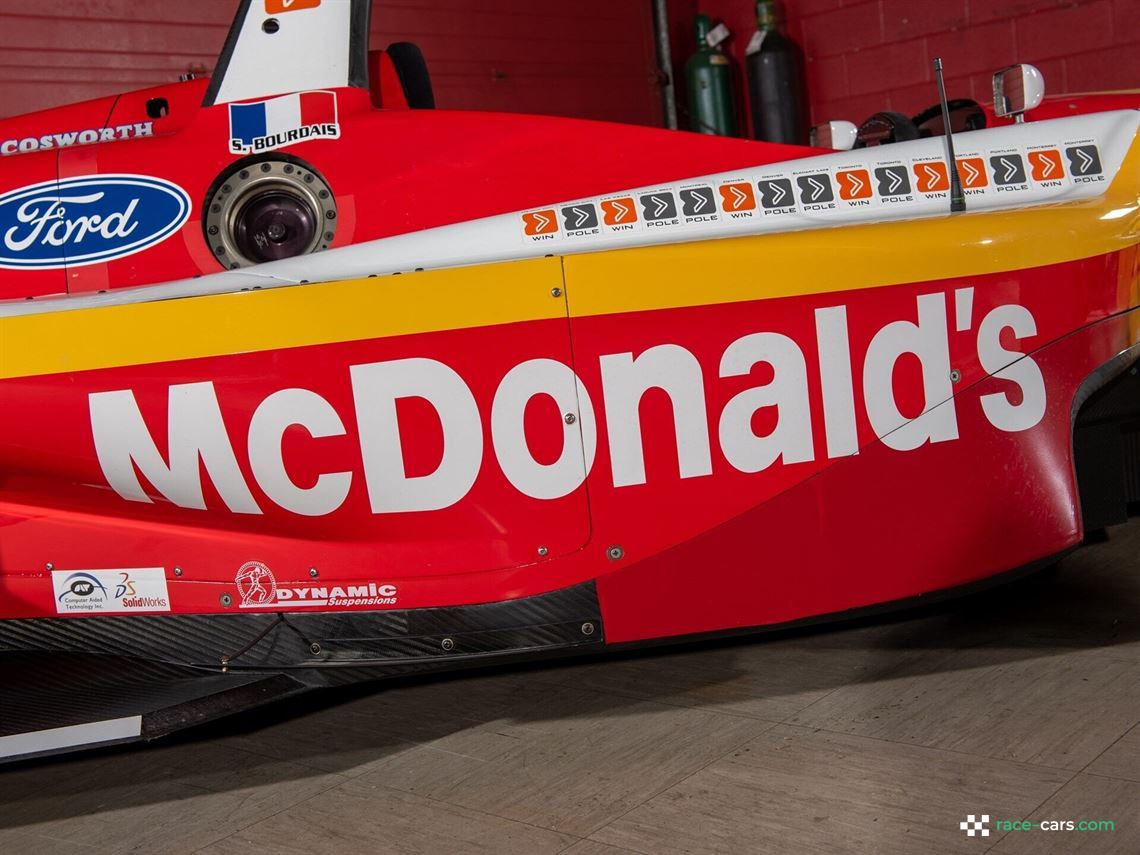 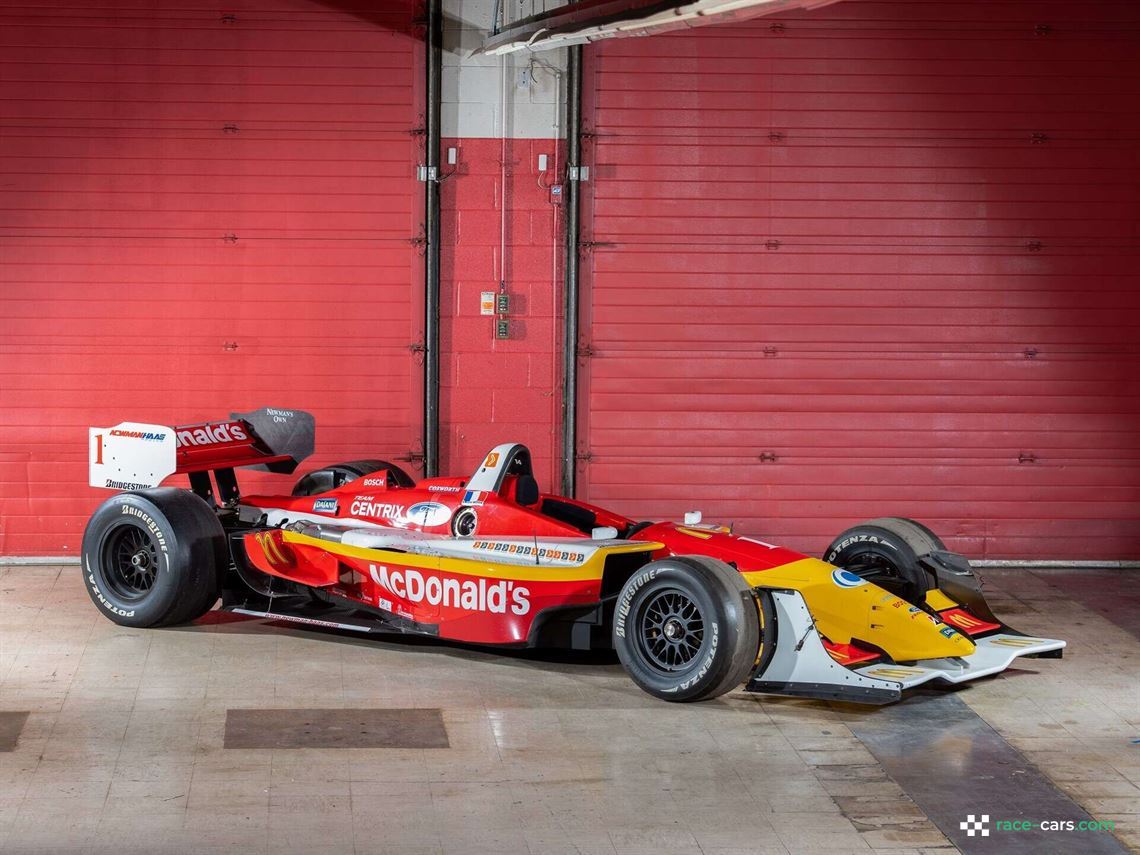 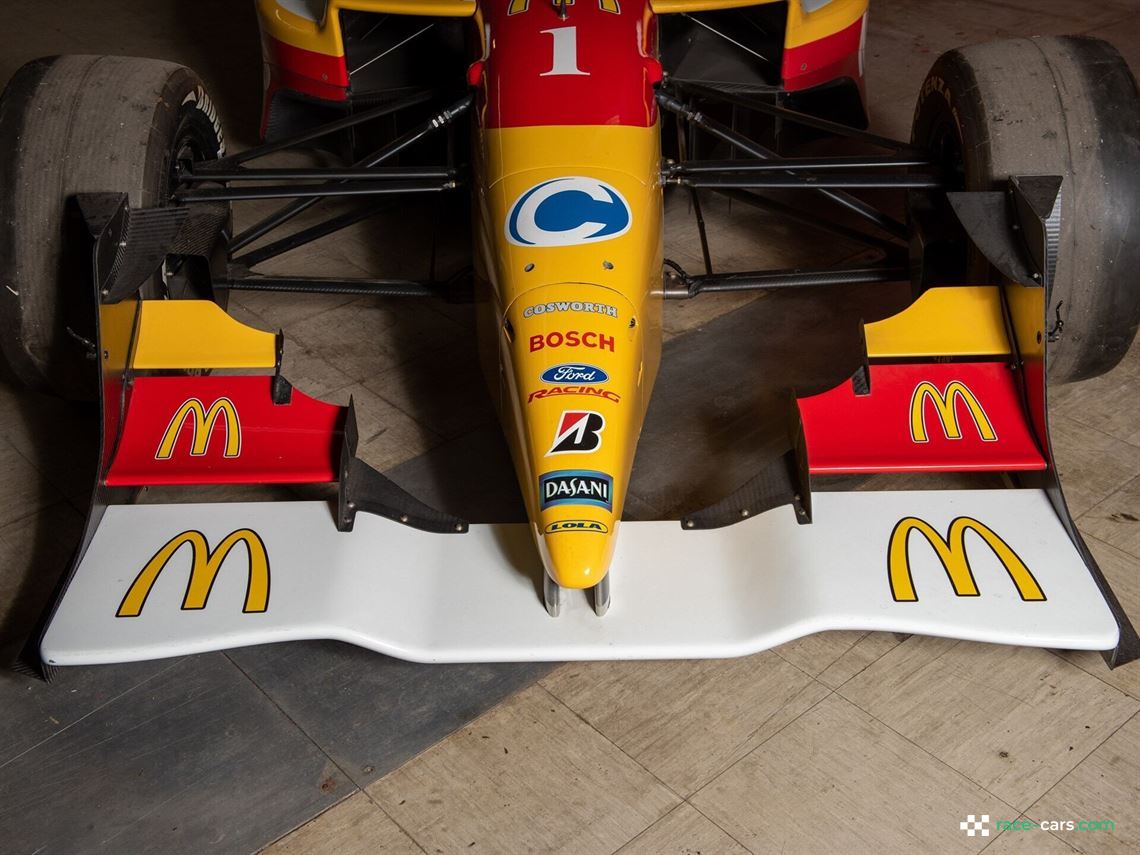 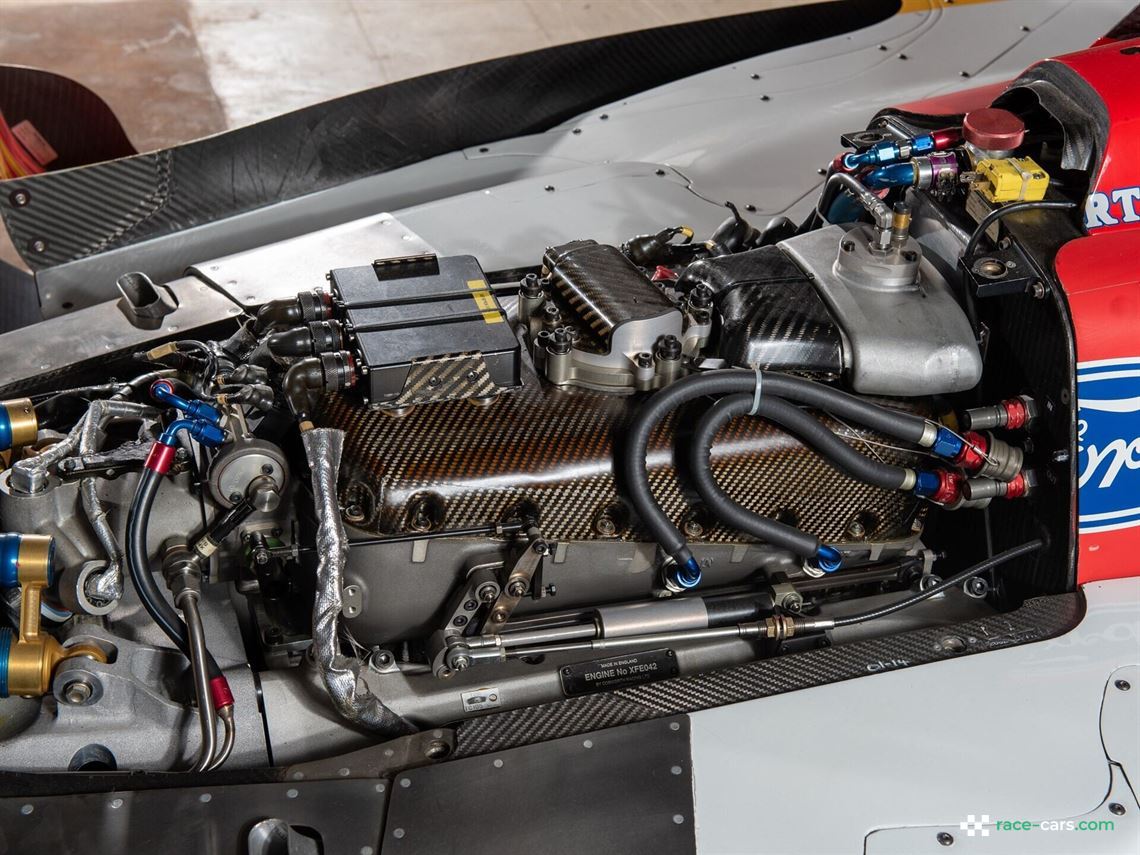 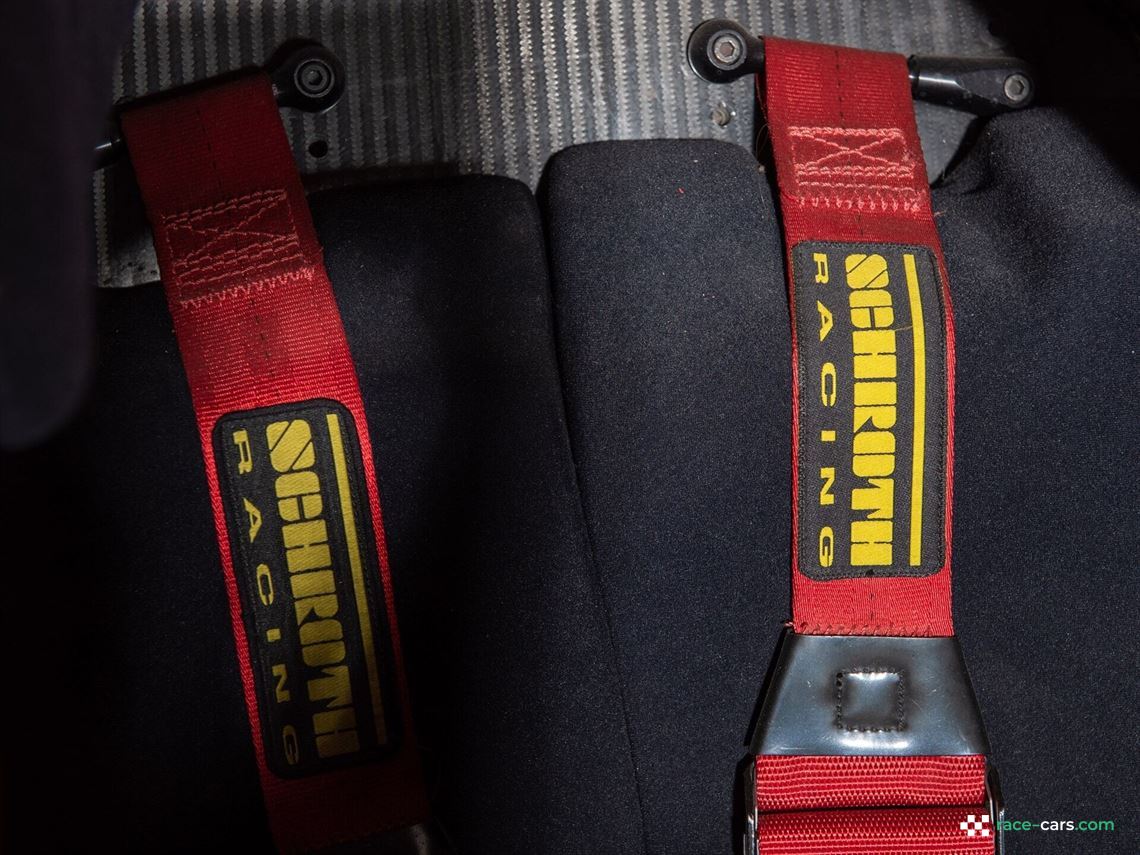 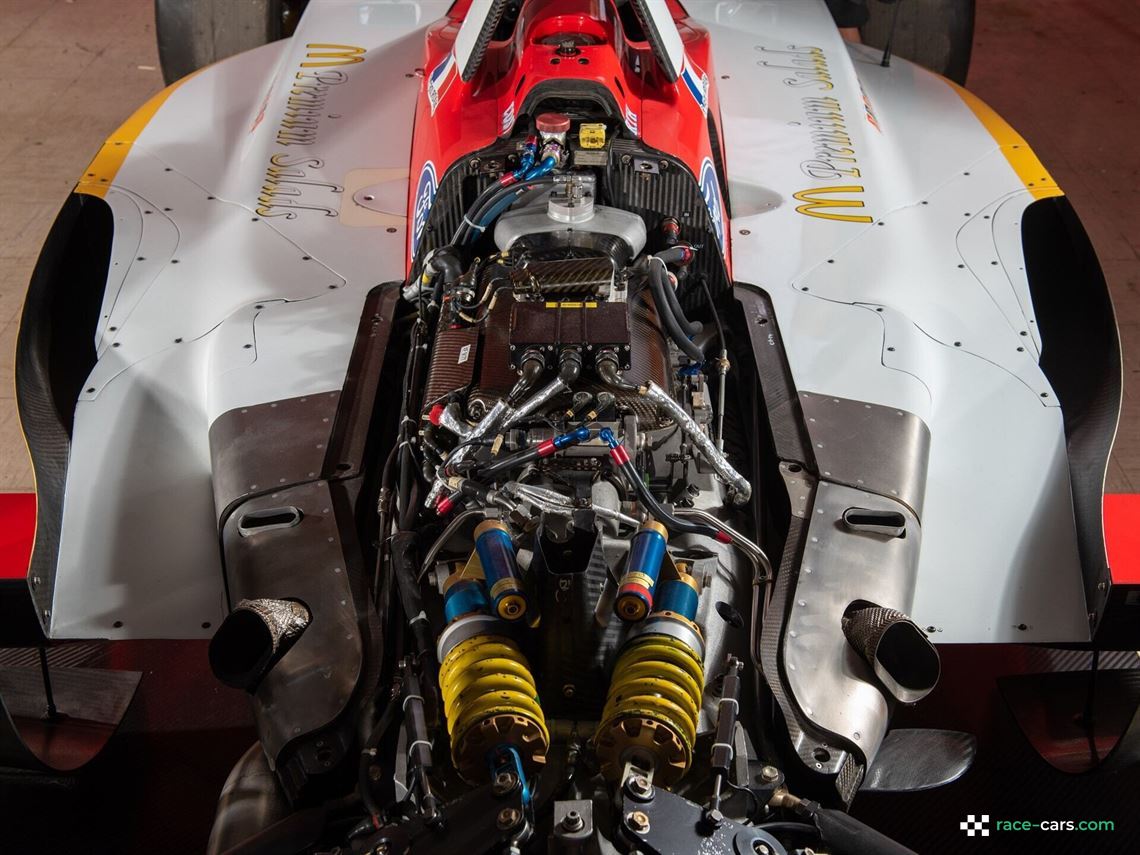 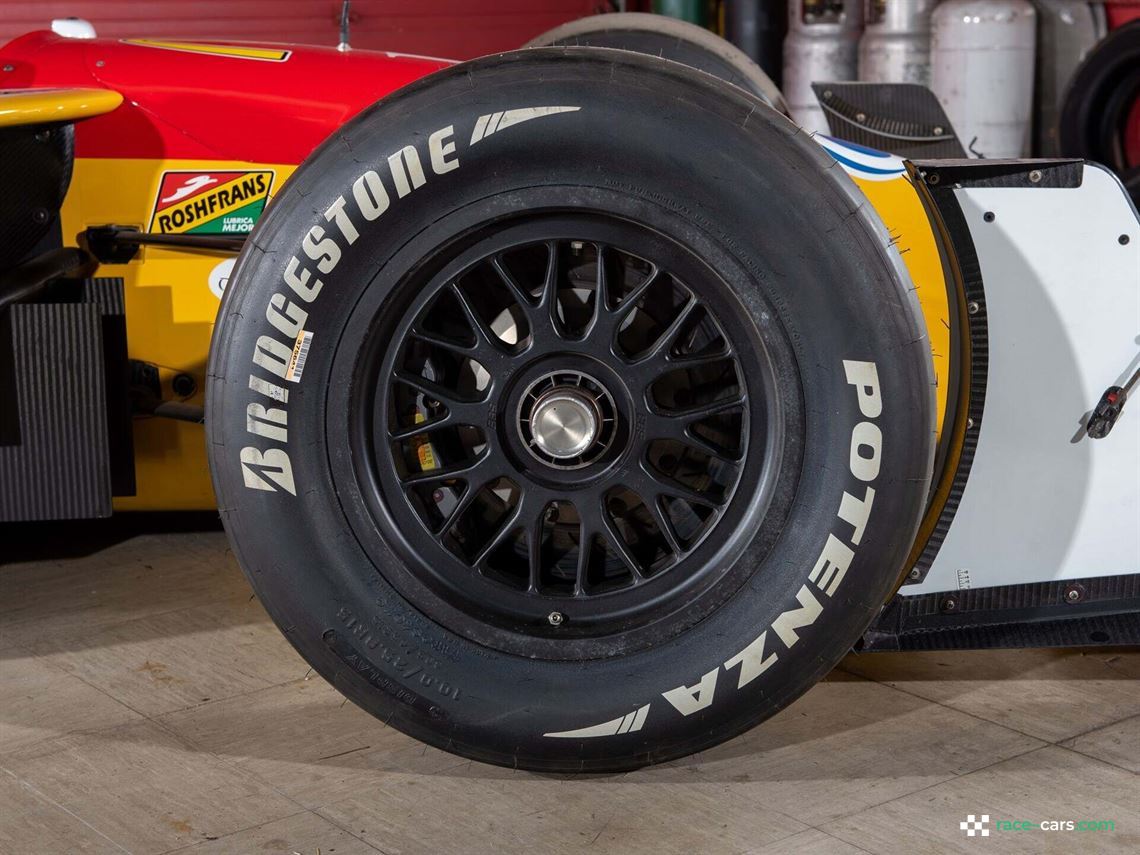 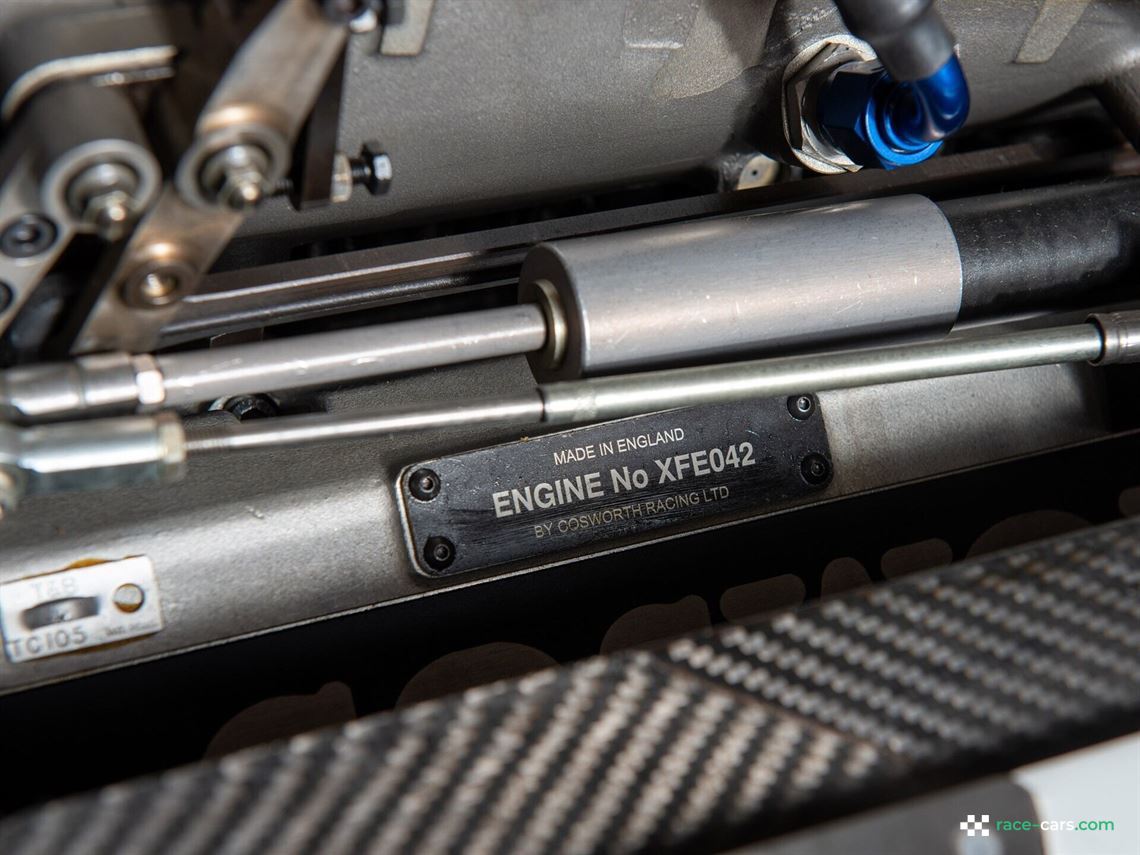 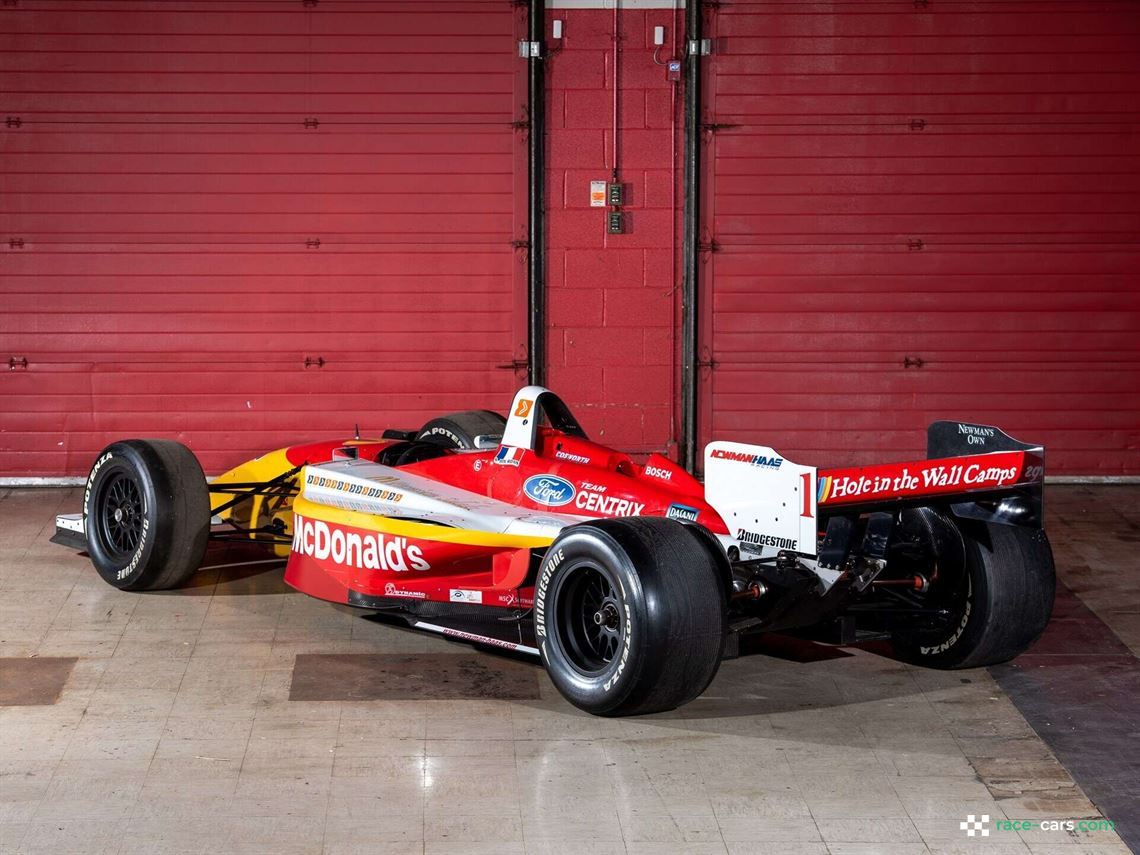 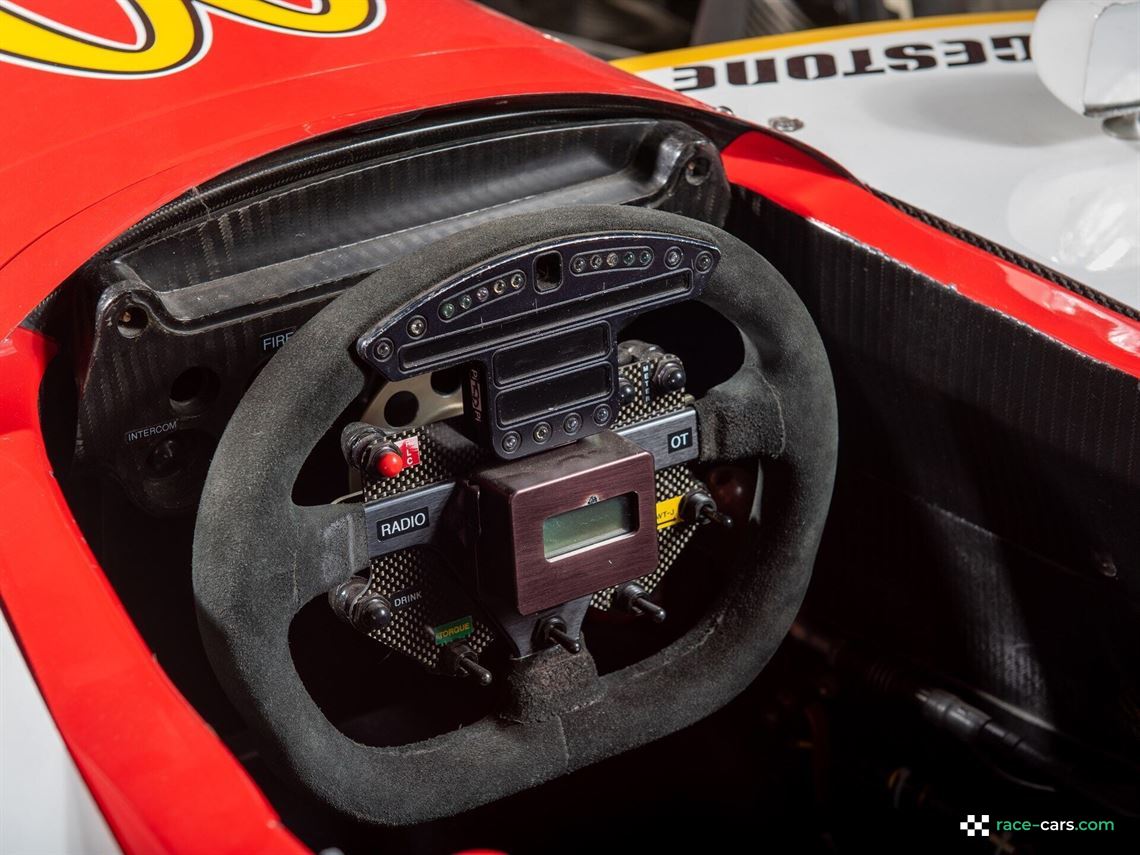 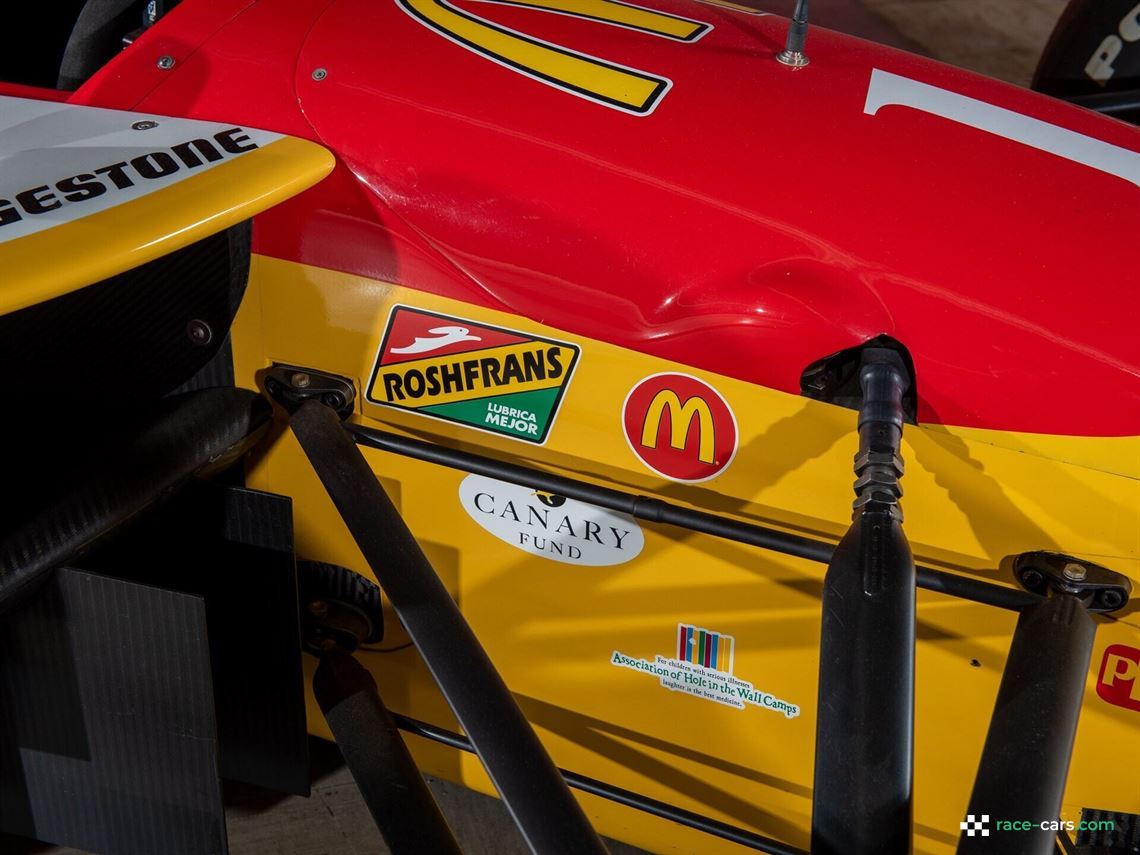 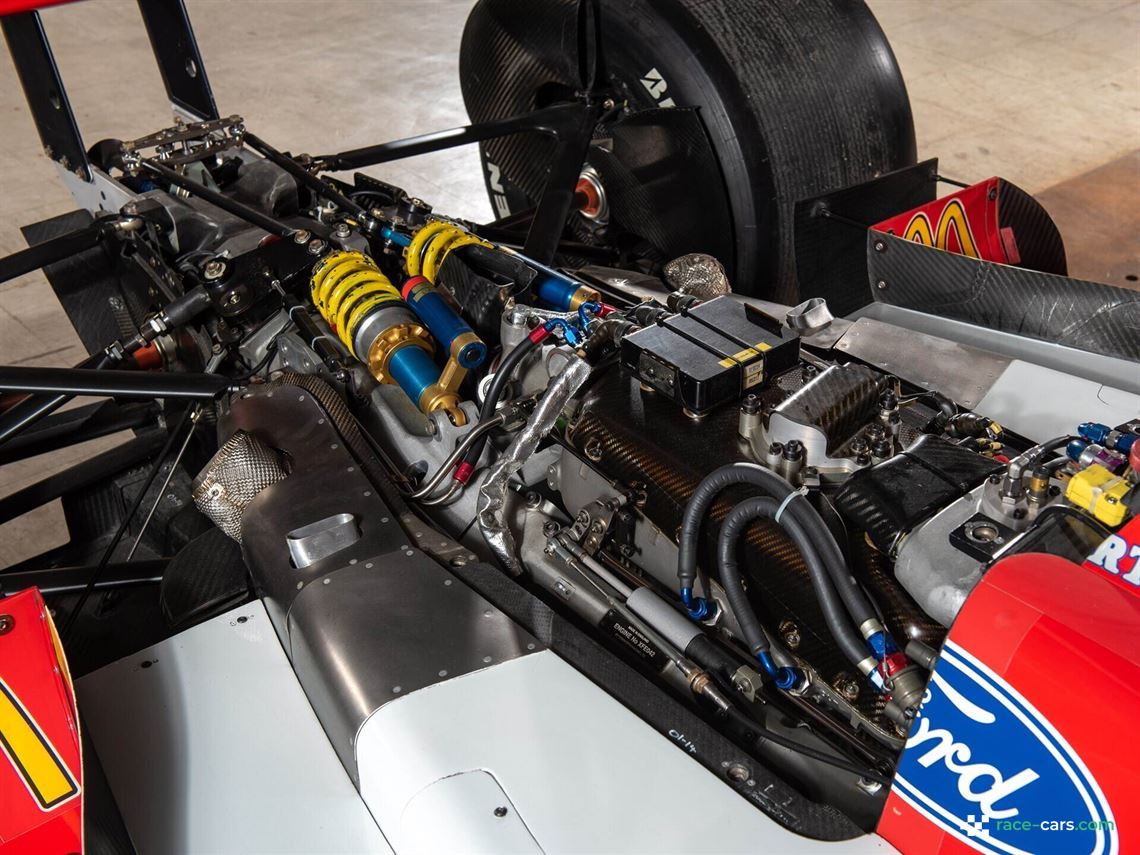 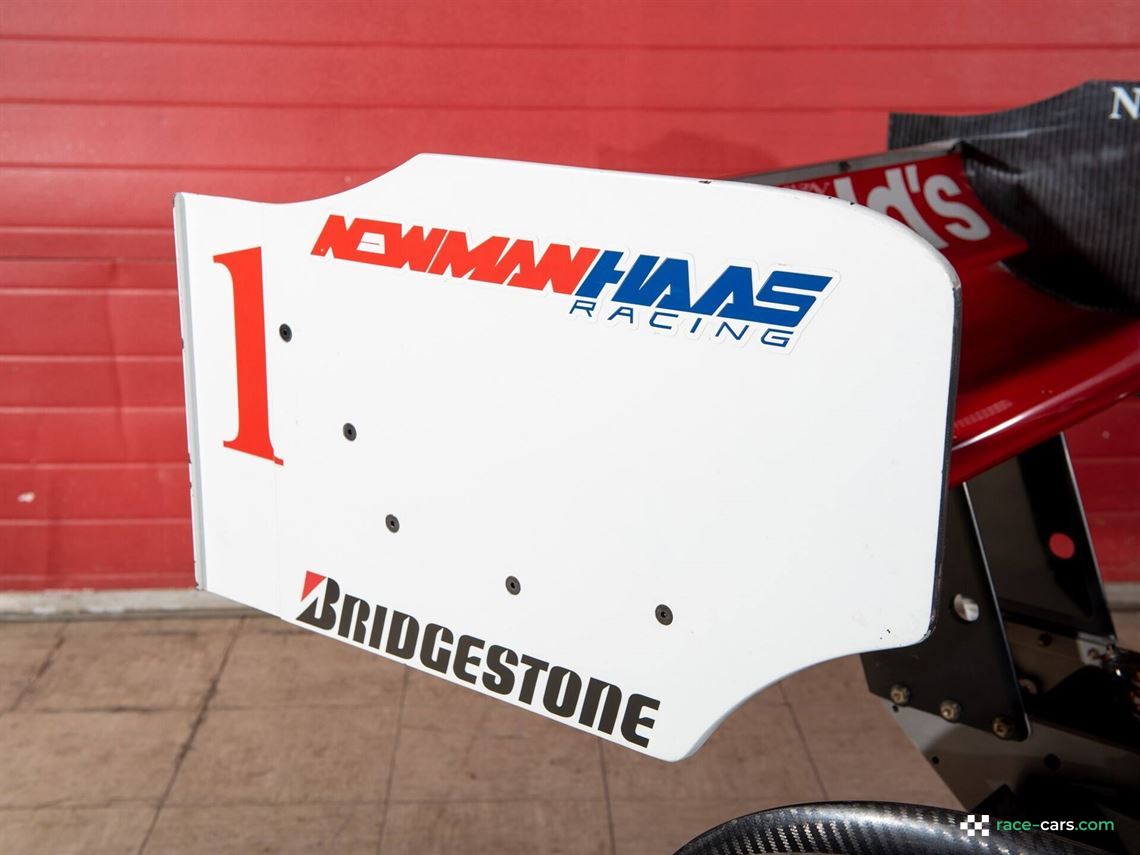 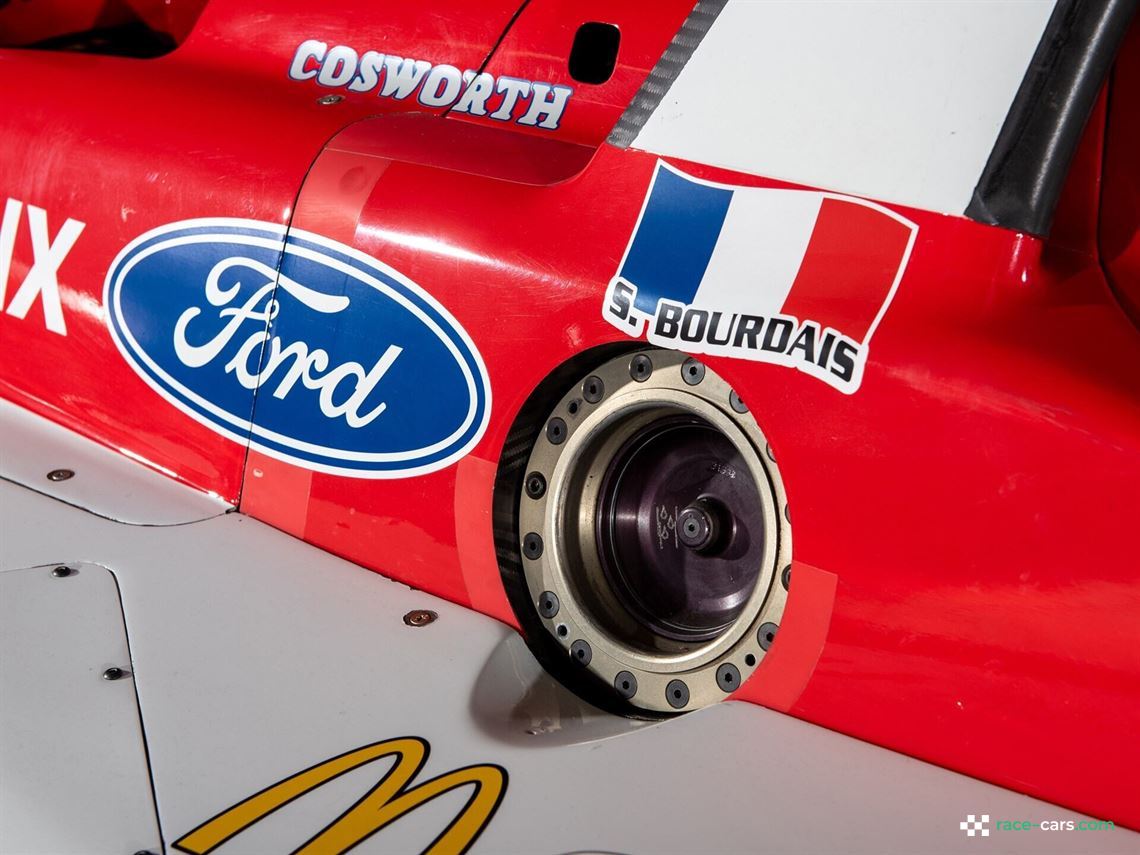 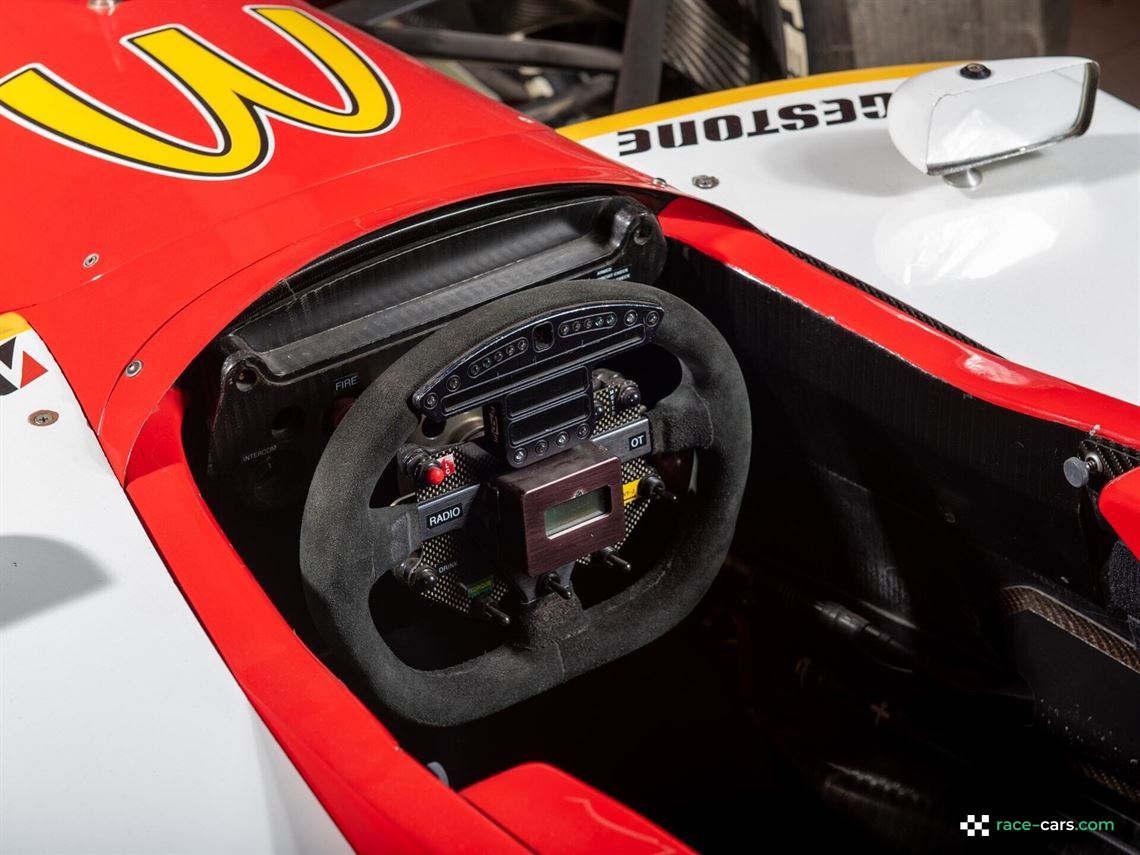 Entering the 2001 CART FedEx Championship Series, it seemed that the perennial title-chasers Newman/Haas Racing were beginning to lose their grip. Though the team’s duo of young Brazilian drivers, Cristiano da Matta and Christian Fittipaldi, offered a glimmer of hope, Newman/Haas was entering the eighth season of their championship drought (the longest in team history). Yet morale was still high for the struggling team, and the upcoming season provided further promise in the adaptation of Lola’s new B01/00 chassis, and Toyota’s “RV” V-8 engine.

Newman/Haas took delivery of their first batch of B01/00 chassis from Lola in late November 2000. Importantly, these were separated into road course (01) and superspeedway (00) configurations. Featuring a carbon fiber monocoque with a double-wishbone suspension utilizing rigid-alloy buttresses and inboard shocks at both the front and rear, the B01/00 was a new, but largely conventional, progression with which CART’s outstanding downforce regulations could be utilized to great effect.

Additionally, Newman/Haas reached an agreement with Toyota to run their V-8 engine. This turbocharged engine displaced 2.65 liters in a 90-degree V configuration, with all-aluminum construction throughout. Redline arrived at an ear-melting 15,000 rpm, and peak power was reported to be in excess of 900 horsepower while burning methanol. With these incredible powerplants and downforce packages, these turn-of-the-millennium CART drivers regularly reached speeds exceeding 240 mph on a superspeedway.

This Lola “Road Course” chassis offered here, 01-14, was originally delivered to Newman/Haas Racing for the 2001 season and then assigned to the team’s #2 driver, Christian Fittipaldi.

Fittipaldi first tested the car on 31 January 2001 at Homestead-Miami Speedway, and then 20 February at Sebring in preparation for the season opener at Mexico’s Tecate-Telmex Grand Prix of Monterrey on 10 March. In this race, he earned his first DNF for 2001. Fittipaldi’s best result came on 24 June, when he used this chassis to secure a 3rd place finish at the Freightliner/G.I. Joe’s 200 at West Delta Park-Portland Raceway.

Pulled from storage at Newman/Haas Racing’s headquarters in Lincolnshire, Illinois, Chassis 14 was resurrected and brought into updated specifications for use in the upcoming 2004 season. With a new powerplant, revised aerodynamics, and—most importantly—the steady hands of driver Sébastien Bourdais, the reborn Lola would prove a dominant force.

Bourdais tested this car through mid-April 2004 at Sebring International Raceway and California Speedway (Fontana) in preparation for the season’s debut at the Toyota Grand Prix of Long Beach on 18 April. During qualifying, Bourdais piloted Chassis 14 to a blistering time of 1:09.800, good for 2nd place on the grid, just 9/10ths of a second behind teammate and pole-sitter Bruno Junqueira. The main event followed much of the same pace, but ended when Paul Tracy slipped by both Newman/Haas drivers to take the checkered flag. Long Beach was nonetheless a remarkably impressive debut for Bourdais with his updated Lola, securing 3rd overall and fastest-lap honors.

Chassis 14 continued its stellar trajectory for the Tecate-Telmex Grand Prix of Monterrey at Fundidora Park on 23 May. Starting from pole, Bourdais maintained a remarkable pace that complemented a brilliant pit strategy; he set the race’s fastest lap (nearly breaking the track record, too), led for 32 of 72 laps, and crossed the line with a nearly four-second gap over the 2nd-place Junqueira.

On 20 June at the Champ Car Grand Prix of Portland, Bourdais, yet again, kept up his incredible pace from pole to secure his second victory of the season with this Lola chassis. Additionally, he also leapfrogged over Junqueira for the leading spot in the Drivers’ Championship. Two weeks later, Bourdais polished off the same exact result following the Molson Indy Toronto at Exhibition Place, where he again started on pole with this Lola-Cosworth and grabbed the win just ahead of Jimmy Vasser, while also earning another fastest lap accolade.

The Grand Prix of Road America on 6 August saw Bourdais lead from pole for the fourth time, though he battled through a closely fought, 48-lap contest to finish 3rd—just over three seconds behind winner Alex Tagliani. He would quickly rectify this slim defeat by dominating the following race at Denver—though not with Chassis 14, which was not pressed into action again until the Bridgestone-Corona 400 at Las Vegas Speedway on 25 September.

At Las Vegas, Bourdais qualified 3rd. The blinding pace of both dialed-in Newman/Haas cars of Bourdais and Junqueira gave the team an awesome 1-2 finish. Bourdais secured his sixth win, and the team had all but guaranteed themselves a championship. But which driver would raise the trophy?

FLAT-OUT TO THE FINISH

Another 1-2 finish at the Lexmark Indy 300, with Junqueira leading Bourdais, meant that the Frenchman now kept a narrow lead of just 22 points. So long as he finished above 11th at the season finale on 7 November in Mexico City, the Drivers’ Championship was his. Not one to cut it close, Bourdais took this Lola-Cosworth on a closing act to remember.

A flat-out qualifying session earned him pole for the start of the Telmex-Tecate-Banamex Grand Prix at the Autódromo Hermanos Rodríguez. In a show of complete domination, Bourdais did not relinquish his lead even once during the 63-lap finale—despite two pitstops and a spin on lap 42 which saw his ridiculous 17-second lead reduced to five seconds. Despite cautious reminders from race engineer Craig Hampson, Bourdais took Chassis 14 flat-out the whole time, setting yet another fastest lap en route to his title-clinching win.

After the 2004 season, the car was displayed for several years in the lobby of Newman/Haas Racing’s headquarters, alongside some of the other championship-winning chassis on offer from the Haas Collection.

Presented today still wearing the famous McDonald’s livery, fitted with a period-correct Cosworth engine, and accompanied by workshop manuals and laptop, this is an incredible opportunity to acquire a championship-winning car directly from one of the most famous teams in American open-wheel racing: Newman/Haas Racing.